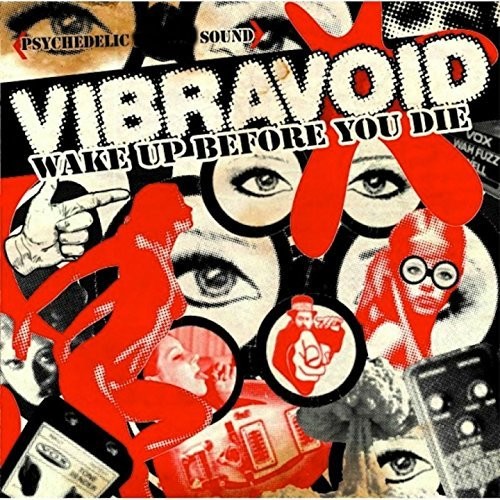 Vibravoid set the scene with their new studio album "Wake Up Before You Die". "Wake Up Before You Die" is the most prolific and best Vibravoid album in their career and surely the ultimate psychedelic album of 2016. Over 25 years of a mind expanding underground-odyssey led German masters of modern psychedelia into new dimensions of sound that will blow your mind into pieces! "Wake Up Before You Die" what title is better to choose these days? War is over - but only if you want it! Vibravoid crank up their amplifiers to maximum and switch clocks back to create the most wonderful world of colours and sound as a contrast to the news on TV. "Wake Up Before You Die" consists of short and ass kicking songs to feed your stereo. Every single note has the effect of LSD and Vibravoid bring LSD to all their shows - LSD, that's Lightshow Society DĂĽsseldorf, who project a unique and mind blowing illumination that gives an enlightening impression of how the 1960s have been. Vibravoid know how to create a real psychedelic effect just through the right combination of lights and music. "Wake Up Before You Die" is a musical lightshow that makes the most colourful colours, stroboscopes and black light explode in the listener's head! Vibravoid master the difficult gap between Pop and Experiment, "Wake Up Before You Die" almost delivers the essential Vibravoid sound. Vibravoid shine with brilliant cover versions of Traffics Hole In My Shoe - featuring beautiful Viola Road from Milan, Stepping Stone elevates The Monkees into an interstellar orbit around Mars and Just Let Go by The Seeds bursts of authentic Flower Power charm and ear cutting fuzztone guitars! Now that you have read about it - see how it is done!